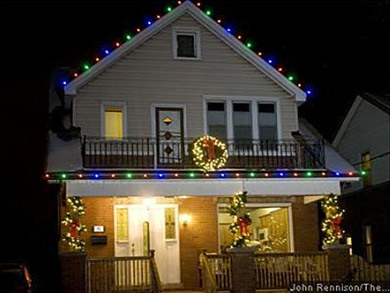 The family of a Hamilton soldier serving in Afghanistan has received a special Christmas present from an Oakville company.

Workers from Christmas Décor showed up Wednesday morning at the home of Master Corporal Scott Atkinson, 38, and decorated it with lights, garlands and a wreath to ease his absence from his wife Dawn, 37, and his two children, daughter Murryn, 11, and son Stuart, 9.

Dawn Atkinson, who works as a security guard at Mohawk College, arrived home from work after 5 p.m. – just at dusk — to find the Balmoral Avenue South home swathed in blue, green and red lights and a Christmas wreath hanging above the front porch.

“You pull up and the lights are there, and now that there is snow on the ground, it really does make it feel a little more like Christmas,” said Atkinson. “It is hard when Scott is not here at Christmas, because part of our family is missing.”

Christmas Décor, which specializes in holiday decorating, is a Texas-based company with 300 stores across the United States and Canada. Since 2003, American outlets have decorated the family homes of U.S. soldiers serving in Iraq and Afghanistan.

Don McQueen, owner of the Oakville store, is decorating his second home in Canada. Last year, he decorated the home of a Milton soldier.

But McQueen says he also has a personal reason for helping military families. Two of his brothers are in the Canadian Armed Forces. Major Gary McQueen is based in Toronto and Major David McQueen is based in Kingston. The latter brother served in Bosnia, Croatia and Haiti.

He said he found the Atkinson family through the Military Family Resource Centre, based in London, Ont. He met with Dawn Atkinson last week to find out what type of decorations she and her family would like to have on the front of their home.

Master Corporal Atkinson has been in the military for the past 10 years and serves in the logistics corps attached to HMCS Star. He had been a reservist for eight years with the Argyll and Sutherland Highlanders. The Stoney Creek-native is on his second tour of Afghanistan and is stationed in Kandahar. He was also away for Christmas during his first tour.

Atkinson said her husband is “thrilled” by the generosity shown to his family. They are going to take pictures and send them to him via e-mail, probably before they talk to him on Christmas Day.

Atkinson said she worries about her husband's safety, but tries not to think about it.

“I just put it at the back of my mind,” she adds. “Once Scott gets home, I can have my meltdown.”